Where Are The Next Power Women?

Everybody agrees to the logic of broadly pronounced claim that “Only Companies who have the best talent win”. However, in reality only very rarely a woman is upweighted alongside with her promoted male boss. Only very rarely a woman succeeds another woman into the board rooms of the corporate world. Does that imply scarcity of talent among women? Definitely not.
In the present knowledge economy that struggles with waves of economical crisis open discussion about women in leadership is relevant more than ever before. As the job market shrinks - we see downwards trend in Central Europe in No. of executive women in the top positions - women are perceived as highly risky to hire.
A woman is by nature different – being more creative, more people involving, more interested in results rather than in hierarchies. Women in high positions are – thanks to their small No. – still much more visible and exposed in media. An unintentional shining media star may put the other folks in the shadow and change the senior management team “club rules” that is seldom desired.
The male bosses would have to enter new waters and put their own reputation at stake in front of their male pals that is rather rare. It has a lot to do with corporate cultures that have as a norm masculine leadership styles and non-inclusive informal networks of men who support each other especially during the crisis times.
And women themselves too often do not help to solve the issue. Women are mistakenly assuming that they can make it through the hard work alone and not through networking and the social side of the corporate ladder. They do not realize that their more direct leadership style limits their putting up with the corporate agenda. Or they give up the battle too soon, accepting the “glass ceiling” status quo that can be as well a result of not having enough confidence while not seeing enough role models around. Or finally they do not see the value in combining forces, mentoring and helping each other up.
There are already few women role models who have made it to the top themselves and since then they are trying to push also other women up– like Sheryl Sandberg, the COO of Facebook or Arianna Huffington from The Huffington Post. Their initiatives (e.g. building women circles or opening new channel for Women in Tech) give courage to other women to make it happen as well.
It certainly does not mean that every woman leader has the desire to jump at the top or has the skills and capabilities to succeed there, however once we accept as a society, that women have a tougher time as they move through the higher ranks than they do at the more junior levels, there will have to be a discussion about what we ALL are ready to do about it. How can each of us make a difference - having in mind that natural evolution of the mankind toward greatness and balance is far better than emposed quotes from the EU Commission.
Should the initial question be rather rephrased into: „Where are the male leaders with guts to hire the next power female executives?
***
The unique value women bring to leadership positions,  bullet point list from Magus Consulting
Note:  The EU commission has ambitious objective to increase women's presence on corporate boards to 30% by 2015 and to 40% by 2020, up from 12%. The EU Employment and Social Policy Council urged national-level action by 2020 to  "promote the equal participation of women and men in decision-making at all levels and in all fields ."  From the eyes of the year 2011 the goal seems unrealistic to achieve….

2011 World´s Most Powerful Women According To Forbes

More On How Sheryl Sandberg Helps Other Women Up

Why Women Have Barriers To Help Each Other Up?

Many people claim to be the real experts on social media. Many people struggle to understand there is more than just “cool” conversation with fans and followers on Facebook, Twitter, LinkedIn and other sites, especially when shared on behalf of a company.

Although each social media site has its own culture, language and communication style, all have one thing in common. There are ethics to be preserved. Otherwise negative coverage explodes like a time bomb.

Take the recent case of Microsoft, building up on Amy Winehouse sudden death, trying to exploit mourning of twitter community for its own commercial benefit:@tweetbox360 Microsoft UK PR : Remember Amy Winehouse by downloading the ground-breaking ‘Back to Black’ over at Zune: social.zune.net/album/Amy-Wine… 25 Jul via web. A lot of people found this initiative insensitive and Microsoft had to change the tone: "Apologies to everyone if our earlier Amy Winehouse 'download' tweet seemed purely commercially motivated. Far from the case, we assure you." Following later with a compassionate tweet: "With Amy W's passing, the world has lost a huge talent. Our thoughts are with Amy's family and friends at this very sad time."

Microsoft is not the only Company facing a debacle within its on-line (mainly Twitter) community, in that case due to underestimating community distaste for commercial usage of a celebrity’s misfortune. Some flops are built up incidentally, other time fiasco is a result of purposely issued tweet aiming to test the communication boundaries while getting the media coverage at any costs. 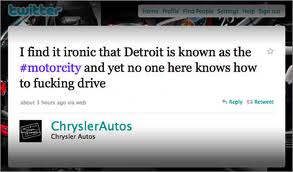 A blunder was most probably a reason for crisis communication of Chrysler Autos this March, after an employee from the hired New Media Strategies agency has mistaken her account for the one she was managing on behalf of @ChryslerAutos and issued following tweet: “I find it ironic that Detroit is known as the #motorcity and yet no one here knows how to f#king drive.” Chrysler immediately after apologized for having their brand compromised and took steps to resolve the issue. 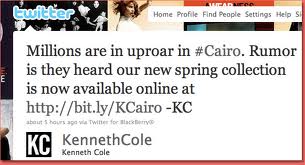 Another case was the one of Kenneth Cole, an American fashion designer, who tried early this year to use the upheaval in Egypt (#Cairo) to promote his own spring collection on Twitter. Luckily for him, the whole event faded while the huge initial negative feedback was replaced not just by instant apology of Kenneth Cole himself, but mainly because Twitter geeks started to joke under #KennethColeTweets about this brand: „People from New Orleans are flooding into Kenneth Cole stores!“ or „People of Australia: Water up to your ankles? We´ve got your Kenneth Cole Capri right here!“. Community sentiment changed from asking people to #unfollow the brand towards growing No. of Kenneth Cole followers laughing about the whole thing.

Humor have already saved attractiveness of many brands, but one cannot count on it in crisis management. Much more appropriate is to stay authentic and real, truly tuned in the community mood. With system for effective monitoring of social media discussions 24/7 as well as with ready strategies and plans for immediate response to unintentional flops each Company can hope that the issue will fade away as the on-line community will move on to the next big thing.

When CEO Himself Tweets For His Company, Issue Turns Into Opportunity

When the news about tweeting CEO Pieter Uys on behalf of Vodacom - the South Africa´s largest cellphone Company - spread out on Twitter early July, I was happy there is the first CEO herald, who takes social media opportunities seriously.
Pieter has not just installed internal effective monitoring systems to track the Company´s reputation on 24/7 scale. When he got alert about connectivity issues being discussed on Twitter and Facebook, he immediately took the time to personally respond to subscribers of Vodacom, who experienced the service downtime. To an angry customer tweet:  "@Vodacom are you ignoring my last tweet. If we don't pay you chop us. If you don't provide service we don't pay! @uyspj",  Pieter Uys himself wrote back: "@marknel1. Hi Mark. I am not ignoring you. Working on making you smile again :-)". And later that night, Pieter continued to keep his customers aware, he is there for them to solve the issues: “Words can’t express how sorry I am about today’s problem. Flat out working at making sure all is 100%. Pieter.” He shared updates until the problems were solved.
Instead of probable consequent negative press coverage and a stream of customers leaving to competition, Uys not just attracted positive international attention, he won the respect of the hard to persuade tweeting community: “The fact that you are still working at 11pm speaks volumes Pieter -- as does your apology. Bravo,” Chris Moerdyk.
Customers were astonished, that a CEO himself took the time to speak with them. They got reassurance that the problems are temporary and being solved with high priority, as the CEO himself puts his credit into the game. And because Pieter Uys listened and cared enough, because his tweets were authentic and with clear intentions, he was able to switch opinions.
As Vodacom case shows, nowadays there is a huge benefit when a CEO acts as the public face of the company to both the customer community as well as the marketplace as a whole, when he shifts the emphasis from a broadcast and self-centered mentality to one of listening and serving the community.
Vodacom´s CEO clearly understood, that social conversations nowadays have turned the tables. Customers are more and more empowered to publish their thoughts, there is no way to stop or control them. Brands and companies are no longer expected to be perfect, quite the opposite. And the ones that continue to repeat the good old message of "You - customer- are lucky we exist. We are perfect. It is you that is not" are definitely heading to face a big surprise.
Reputation is not just something to "protect".  Reputation is something to be built - every day, each moment, every single step. Social media offer a great opportunity to enhance it for brands and companies, especially if they are led by brave and progressive CEOs.