Because We Always Have A Choice

There are times in life, when we are on top of happiness, on top of the world.  We collect winning awards for our job achievements, we are winning in sport, or passionately in love, or just enjoying time with our kids and friends. Smiling to everybody. Celebrating life.
As everything in this world wants to be in balance, naturally this happy phase is eventually transformed into time, when we have to deal with many challenges (Murphy’s law) at the same time. We are faced to restructure our inner believes, to find extra strength. We are at the crossroads.
In the words of Bagger Vance (The Legend of Bagger Vance),  the down time may be quite provoking to start to move on, to rediscover the inner self: “Inside each and everyone of us is one true authentic swing… Something we were born with…Something that’s ours and ours alone… Something that cannot be taught to or learned… Over time the world can rob us of that swing. It gets buried inside us under all our wouldas and couldas and shouldas. Some folks even forget what their swing was like“.
Some have to find themselves, their inner piece and harmony, by their own recipes. Others maybe lucky to be helped by mysterious caddies, like Judah in the film “The legend of Bagger Vance”. Judah’s caddy appeared mysteriously and encouraged Judah to return to golf, and when playing a championship, not to give up the most difficult shot, not to give up on himself.
Bagger Vance coaching was about a “Game that cannot be won, only played. Because we always have a choice. We can stop. Or start. Walking. Right back where we have always been.”
We are seldom alone. We have to look around and open up to help from friends or family, or even strangers. There is an urgency for us to come out of shadows.  Time to choose.  Time to give it everything. NOW! The next happy phase, on much deeper level, may be waiting for us in the most unlikely places … and at times when we need it most.
All the big achievers have something great in common. They have never lost hope. They have never stopped pursuing their mission of life. Thus they have managed to change the world for the better!
Posted by Jana Budikova at 2:59 PM No comments: Links to this post

What Is Your Territory?

If it was OK before for individuals to define themselves by their rank within a hierarchy, they are lost now, as the hierarchy is too big. According to Steven Pressfield, the author of The Legend of Bagger Vance, in his book The War of Art, stated that we have entered a period of Mass Society. The only option nowadays is to define ourselves through our connections to a territory. Only then we will know where we stand and thus we will find security. And the world will start to make sense to us.
In the hierarchical arrangements, very popular in Companies, large or small regardless, we compete against all others seeking to elevate self by advancing against those above, while defending own place against those beneath. We evaluate own happiness or success or achievement by our own rank within the hierarchy. Feeling most satisfied when being high and most miserable when being low. The personal crisis may start for somebody when he changes or looses his job, retires, gets ill. Some may think they have lost themselves. Feeling they are nobody. Instead of a state of depression they are being offered a wonderful gift – the chance to start to understand the principles of the Universe. They are being offered the chance to define their own connection to a territory.
If you are in doubt about your approach, imagine that you are all alone on the planet where a hierarchical orientation makes no sense. There is no one to impress. Are you still ready to pursue that activity? Stevie Wonder’s territory is the piano. Arnold Schwarzenegger’s the gym. What is yours?
It takes more effort to define THE territory, than to play the hierarchical game. A territory can only be claimed by work. A territory does not give, it only gives back. It returns exactly what you put in. A territory sustains us without any external input. Our role is to put in effort and love. The territory absorbs this and gives it back to us in the form of well-being.
The artists felt the need for territory thinking well before us, the business people. How long it will take this idea to penetrate the business world? Will it affect soon the approach of Companies and Brands to Positioning Statements? The Approach To Human Resources and Leadership Art?
Our job in this lifetime, as Pressfield well stated, is not to shape ourselves into some ideal we imagine we ought to be, but to find out who we already are and become it. We must operate territorially. Do our work for our own sake. And give ourselves courage and positive kick-off, e.g. by the words of Goethe: “Whatever you can do, or dream you can, begin it. Boldness has genius, magic, and power in it. Begin it now.”
Posted by Jana Budikova at 12:27 PM No comments: Links to this post

“They Can Try To Punish You, But NOONE Can Take Your Smile,…”

…said Heda Cechova in a documentary film describing her life of a moderator star from the 50th and 60th and of a forbidden person afterwards due to her attitudes to communism.
I agree totally. I think we need to realize the value of a smile whenever things do not go right for us. It takes a lot of courage and internal strength. It takes a lot of self belief. Integrity is more important than instant fame or money. Giving up and going with the flow, as many do, is not the right option if we want to value ourselves. Our approach to short-term set-backs is what matters, as it can actually bring personal satisfaction and make us stronger. And as a paradox – to madness of the people who enjoy silencing others – this positive response sometimes drives immortality. Because the context changes. Like in the case of Heda Cechova, when the communist system has been broken to pieces, she was able to shine again. She will be always remembered for her approach to difficult situations, for the grace with which she used to handle life.
For somebody it could be suppression due to political reasons, for others it could happen at work environment or at home. For someone the challenge is related to health. If you decide to take this not easy, but in the end more fulfilling way, do not forget it helps to visualize the examples of people who have already taken this journey before you.

I personally could build my own strengths from family examples. My grandfather (died at 32) or my sister (died at 19). My grandfather was in a concentration camp due to his courage and approach to life, died in pain from lung infection, without support, but refusing to go to gas. My sister at the age of 14 diagnosed with uncurable cancer. She was the most positive and smiling person in this world until the end.
Never forget that smile is contagious. Smile is powerful. Smile is catchy. We should never let others take smile from us.
﻿﻿
﻿﻿
Posted by Jana Budikova at 11:54 AM No comments: Links to this post

Email ThisBlogThis!Share to TwitterShare to FacebookShare to Pinterest
Labels: Inspiration 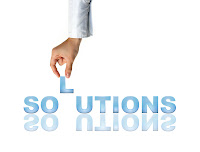 One professional magazine was doing recently a survey about the level of customer service in the Czech Republic. Each of the participants was providing absurd negative stories from own life. Stories that were full of total exhaustion from the situation. Stories, that showed how some service providers lied or applied the power over the customer just because of their own interests.

It seemed that we all share the same experiences, just the people playing key roles change. Does it really have to be so?

I have a picture of few very interesting positive people who represent for me heroes in the area of customer service The good news is they live here with us. They did not disappear!

Like my hairdresser – she called me one Sunday just to let me know there is a director job opening. Or my dentist who did not want me to pay for the check-up and tooth cleaning because I did not have cavities (even though she does not co-operate with any insurance company).

Or a caretaker from a pension in Horska Kvilda in Sumava – she not only offered advices for trips in the surrounding, she offered home made food for the dinner, that was not part of the offering. She smiled all the time and always thought how she could make our stay even more joyful.

Or the Czech shop assistant from a fashion shop in Munich – she called me that she is going on maternity leave and that one of her colleagues will take care about me during her absence, fitting the goods and sending afterwards by courier for free from Munich to Prague to be perceived as normal standard.

These people have the same things in common. They care so much about you. They go extra mile. They listen and try to help. They smile, live at present and try to enjoy every minute of today despite of bad weather or other negative conditions. They share their joy with others. They keep unwritten promises and take responsibility if things do not go right. They put your benefit first and their profit only comes as second. They leave a very pleasant warm feeling after they are gone.

I admire them. I think they deserve increased visibility, and many more clones …
Posted by Jana Budikova at 4:13 PM No comments: Links to this post