The Art of Forgiving in Highly Competitive Business World

I have heard it many times before: „You have to forgive people for what they have done to you, even if they were driven by evil, non-ethics behaviours, damaging you or the work you have done.“ Easily said, but I have never understood: "How come I can be so generous to somebody who is mean to me?" Studying many clever books I have got the idea.
The more I was thinking about that “nasty” person, the more I have accumulated my anger inside myself. The more I tried to escape, the more I was trapped. The fact that I refused to forgive meant that the burden lied on my shoulders not on his ones. The wounds on my feelings, when not dealt with, became inflamed. Only when I started to pay attention to my negative emotions and deal with them in positive way, I could free myself up.
I started to define the new meaning of forgiveness for myself – by forgiving I am actually not agreeing with that person behavior, I am not supporting his or her wrong-doing, I am not forgetting what he or she has done. I am just not enabling them to control my life. I am just not going to live their own nightmare. Because I am sure that those who are causing harm to others were themselves hurt in the past.  They are neither happy nor they live a fulfilled life. Their wrongdoing will reach them sooner or later anyhow.

Forgiving is opening a way for own rich positive life.
Forgiving is one of the most difficult things, especially in the very competitive and tough business world, but when mastered well, it can bring us up to the new heights.
„ Forgiveness is primarily for our own sake, so that we no longer carry the burden of resentment. But to forgive does not mean we will allow injustice again." Jack Kornfield
„The weak can never forgive. Forgiveness is the atribute of the strong.“ Mahatma Gandhi
„The stupid neither forgive nor forget, the naive forgive and forget, the wise forgive but do not forget.“ Thomas S. Szasz (Hungarian Professor of Psychiatry)
Posted by Jana Budikova at 1:38 PM No comments: Links to this post

You will always remember them. You will adore them. You will try to follow their professional path for your own inspiration. They care. They trust. They breathe their passion. They share themselves with this world. They bring you up when you feel down, even if they may not know you.
That‘s why they are successful. Role models. Immortal.
„Really great people make you feel that you, too, can become great.“ Mark Twain
Passion and inspiration are linked together. Are you following your dreams and desires instead of your rational plans? Have you identified your inspirational gurus who make you feel good and multiply your passion to the new hight?

Don‘t waste your time.
This is YOUR turn now to change the world for the better!
For your own fulfillment.
„Twenty years from now you will be more disappointed by the things that you didn't do than by the ones you did do. So throw off the bowlines. Sail away from the safe harbor. Catch the trade winds in your sails. Explore. Dream. Discover.“ Mark Twain
Posted by Jana Budikova at 10:41 PM No comments: Links to this post

Email ThisBlogThis!Share to TwitterShare to FacebookShare to Pinterest
Labels: Inspiration 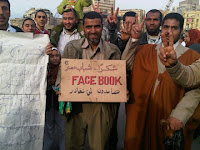 We do not want to be just the Mubarak’s „Those noisy kids on facebook’. We believe that “Freedom is a bless that deserves fighting for it,” the speeches and tweets from Wael Ghonim, the Egyptian activist, Google marketing executive,  after his 12-day disappearance, blindfolding and interrogation, re-energized the Egyptians in their final quest for „the dignity that comes with being actors in a nation’s destiny rather than its pawns“. His extremely human leadership attracted many ordinary Egyptian men and women , who saw in him their own son, ally or companion, crying publicly during a TV interview for the death of people that died during this upheaval. Wael Ghonim inspired many people to remove their fear of personal persecution or even death.
Ghonim showed his nation that they should not anymore fear the Regime, represented by its dictator Hosni Mubarak: „Because the only barrier to people uprising and revolution is the psychological barrier of fear. All these regimes rely on fear. They want everyone to be scared. If you manage to break the psychological barrier, you're gonna definitely be able to do the revolution.“
Fear has become too much frequent experience for many people nowadays. Not just on the political level. I have observed many people experiencing fear in their ordinary lifes – much more simple than life or death, freedom of speech or prison.
They are in fear for their circumstances and future. They are in fear of failure on personal or professional level. They become paralyzed. Fear can be an internal message giving alert to an actual or probable threat. But most of the time it is simply an anxiety about things or situations that haven't happened yet and may be unlikely to happen at all.
Mastering fear requires bearing thinks as if it is impossible to fail. Imagining that behind every failure there is the potential for success, and if we give up too soon, we may never know what wonderful thing we could have accomplished. Only when we remove the fear from our thoughts, we put our energy full speed into doing meaningful things and we may actually start to change the world.
Fortunately Wael Ghonim understood this.

View: Wael Ghonim CNN Interview from Feb 11: Facebook To Thank For Freedom!
P.S. Snapshop on Wael Whonim usage of social media for organizing an upheaval:
Wael Ghonim, 30 years old Google's regional marketing manager for the Middle East, changed the way revolutions are made. Ghonim among others credits Social Media sites – Facebook and Twitter for enabling the revolution that resulted in the resignation of Hosni Mubarak.
Wael Ghonim had been running since June 2010 a popular Facebook page, speaking against police brutality, with 400,000 Egyptian followers. He has named it after Khaled Said, a businessman who died in police custody in Alexandria last year. This page played a crucial role in organizing the protests. Hundreds of thousands of Egyptians started collaborating content. Up to 60,000 people within hours shared on their walls particular video. Internet and namely facebook helped to fight the restricted media world.
In one of his last tweets on Jan. 27, Ghonim expressed his strong passion against the current regime. "Pray for #Egypt. Very worried as it seems that government is planning a war crime tomorrow against people. We are all ready to die," he wrote
After he was released from prison on February 7th, shortly after his TV interview,  at least 130,000 people have joined a Facebook page titled "I delegate Wael Ghonim to speak in the name of Egypt's revolutionaries"
On February 11th, when Mubarak disappeared from the country and all Egyptians celebrated end of his dictatorship regime, Wael Ghonim expressed the credit not to himself, but to the Egyptian nation: „I’m not a hero, you are the heroes, you are the ones who stand on this square.“
****
Posted by Jana Budikova at 1:31 PM No comments: Links to this post

Sustainability of Management Job At Present

Hot topic today - partially due to economical crisis. Too many of my LinkedIn contacts have within last few months changed their job titles. Becoming consultants, experts or investors instead of CEOs/Board members. The leadership market is changing. One can observe the cheaper and younger replace the more expensive and the experienced. Another can view fixed costs cutting at any price as a short-term gain for the Company winning over long-term benefits, overemphasized financials to non measurable values the experienced top leaders bring to the Company.
Each situation is different. The outcome however is the same. I see many talented leaders, who have successful track record of delivering great financial results and developing people, currently looking for new opportunities, not fully utilizing their potential, despite being in their "best age" (40-50).
For the talented leaders this may just be a nice long-time dreamed break from high-speed life and from lasting frustration that has built up over years due to their low influence on local results thanks to increased International HQ decisions. The Universe may be giving them time to rethink life values and career objectives, to re-launch their personal brand. These people understand the principles that brought them to the top and thus they either excel in similar top job again or they start their own business ventures. Their "star" will shine again soon, even stronger. The time in between is for them just a test of their patience to search for the next opportunity and a test of perseverance to find one.
On the other hand the leaders who got their top jobs by co-incidence and luck, who did not build their success themselves,who always played it safe or "win what I want at all costs", feel totally lost. They have never known what are the key pillars of the Company growth they may have inherited. They have hardly at all added significant value to the Company, to their teams or to the society they live in. They have not learn the ability to excel. They victimize themselves. They feel born for the job, that is why they demand it back. They know well how to take, use and manipulate, their big life lesson is to learn how to give, contribute and build. Most of them try to avoid this painful excercise. Their arrogant behavior destroys even the last few opportunities that have opened in front of them.
For progressive leaders the year 2011 should be bright again! The leadership jobs will be again in demand (see more in the attached research from BlueSteps Company). It is a high time for everybody now to do the homework and prepare for the promising future!
Blue Steps Research

Tony Robbins: "What stops us all from moving forward? Fear. Fear can destroy our psychology and immobilize us from taking action. The secret is learning how to use fear instead of letting fear use you!?"
Posted by Jana Budikova at 12:06 PM No comments: Links to this post