PROFIT IN THE EYES OF AN ENTREPRENEUR:

In November, Twitter went IPO, following the strategy of Facebook. Valuation of Twitter at 22times multiple of its sales, even though the Company still founds itself in a loss, shows, that investors appreciate, rather than its historical P&L performance, the high number of its users reaching 200 million worldwide. Investors recognize increasing trend in the Twitter’s user’s base, mainly in the mobile space. Even though founders celebrate, that they have become rich over night, they may not be fully aware of the pressure they will face from now on - the pressure from investors to deliver results every quarter. Investors expect break-through innovations, continuous growth of turnover and shift from a loss into a profit gain, all of that preferably in very short time. Twitter will have to change its way of Company management. Reporting to shareholders on a three month basis in fact means replacement of truly entrepreneurial, opportunistic leadership approach by traditional management of a company listed on the stock exchange, where the leaders do not have so much freedom to make decision and everything is more focused on processes and short-time horizon. I doubt this is a piece of cake for Jack Dorsey and his soul mates.

American support of Bitcoin
The American Senate gave a green light to the development of a virtual currency. They admitted that eventually Bitcoin (BTC) may become an alternative official payment method, which has its advantages in the digital space. However, such virtual currencies must be first regulated and their security and stability must be solved. It must be clearly stated what role and relationship they have towards other currencies.  Legal rules have to come in force, to protect the currency from money laundry misusing. Before this happens, I would not recommend Bitcoin (BTC) as a payment instrument, but I am positive about its future usage in the digital world. At the beginning, Credit cards and PayPal were also a subject to criminal causes, and today we all use them regularly. So why be afraid of an innovation?

IBM in a cloud crisis
Although the IBM strategic priority is to offer cloud computing services, its leaders struggle to realize this intent. IBM focuses itself over proportionally on the big customers; they lack flexibility towards the market shifts and towards the action of arising competition, like Dropbox and Netflix. IBM managers publicly question Amazon for its low safety level, instead of using the media space for promoting the benefits of its own cloud computing services. No wonder that in the third quarter, IBM recorded the downfall of turnover and profit, despite its acquisition of SoftLayer , the cloud specialist. I believe that to recover the sales of the group, it is important to change the business model, to better define the target group as well as to improve quality and availability of IBM services.

IBM will not be able to reverse the negative trend, unless it will put focus on the small and middle sized companies, who represent the future revenue stream.  And trust in the cloud computing expert will remain the key aspect for choice of a provider. How long can IBM attack the credibility of Amazon when it was IBM who lost the pitch to the American CIA? The CIA has already given the preference in cloud computing to Amazon for the second time.

Microsoft attacks Google
For those of you who want to be officially “anti-google” and do not agree with the fact that Google collects personal data about its users and processes them to change the search order based on paying customers, Microsoft created official web pages, as well as an internet shop Scroogled store.  You can express your opinion towards Google´s actions publicly – you can buy there T-shirts, caps, or an-eight-dollar cup, that suggests you to “keep calm, while Google is stealing your data”. Microsoft builds this way on its campaign “Don´t get scroogled”. It softly points out towards the Bing search engine, which is supposed to be more objective. I cannot judge, but after the recent NSA spying affair in the digital world, I may stay with - still Czech owned- Seznam.


This article (in the Czech language) was published in "Profit" magazine by Mlada fronta on Dec. 9th, 2013 You can download it here: Profit in the Eyes of an Entrepreneur 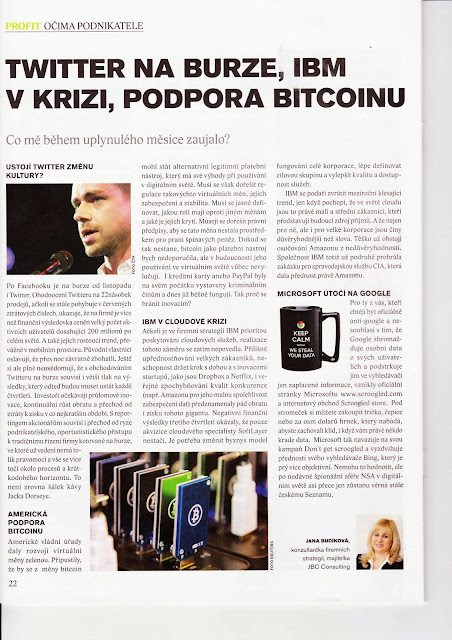 Posted by Jana Budikova at 6:26 PM