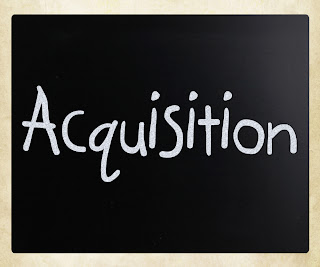 Companies continue with their expansion plans regardless of the fact that after acquisitions up to 70% of them lose their value and report worse results than the branch average after the transaction is over. Companies still show buying appetite despite the economical crisis, even though the amount and value of worldwide mergers & acquisitions is much lower than during the “golden age” between the years 2005-2007. They feel confident that they have learnt their lessons of proper calculation of risks and opportunities resulting from buy-outs. Corporations understand that during the time of market polarization, they need to be among the top two in each market segment; or that they have to own distinctive premium niche or value for the money segment; as all those remaining ones in the middle are squeezed and exhausted. It becomes clear, that if companies want to survive in the long run, they either continuously innovate their own brands and technology, or they buy them from the market.

Shareholders and supervisory boards approve giant mergers & acquisitions (M&A) and accept a high risk of not achieving adequate return on investment (ROI), because most of the time they see buy-out as the only way towards fulfillment of the companies’ ambitious growth targets and thus towards the growth of the share price. The companies’ management is then empowered and made responsible to fulfill acquisition objectives - ranging from penetration of new segments or new geographies; through increasing profitability thanks to synergies, economies of scale and increasing negotiating power on the market; towards increasing attractiveness on the investment market.

The acquired company must strategically fit with the long-term goals of the ‘mother’ company. Management of expectations is however one of the crucial success factors – one must balance the benefits coming from buyouts vs. the value that can be generated by in-house innovations. When the NIKE Company bought UMBRO for 580 million dollars in 2007, NIKE for sure did not anticipated that five years later (in 2012), it will sell UMBRO for less than a half of its value (225 mil. USD). Now, NIKE mainly focuses on the football area on its own innovation. The development of own brands can bring slower growth, however with a higher average rate of return thanks to the medium need for investments. On the other hand, the effects of acquisitions are quicker; even though the yield decreases due to the high capital need.

Strategic fit is not the only criteria for success when the main acquisition target is to keep or to obtain competitive advantage by buying know-how and new technology. The buying company must also have in-house capabilities to further develop the acquired company. This aspect is not always understood. Microsoft learned a painful lesson last year, when it had to write-off 99% of the value of the Internet agency aQuantive, acquired in 2007 for 6.3 billion dollars. Original expectations to keep up with Google’s DoubleClick (acquired in 2007 for 3.1 billion USD) were not fulfilled. Google’s subsidiary DoubleClick, on contrary, survived and now it focuses on uploading ads and reporting their performance.

Adequate acquisition price is always a key to success. A too high price can indicate future problems, as it increases pressure for dramatic cost cutting to backwards justify the transaction value. In 2012 it was a case of Google wanting to more aggressively compete against Apple. Google paid 12.5 billion dollars for Motorola Mobility - to acquire 17,000 patents and 7,500 pending patents. According to experts, this price was too high to be defensible. Three months after the transaction was over, Google released 4,000 employees (one fifth of all the staff). Many experts do not see the strategic fit for this vertical integration (software vs. hardware), thus future success of this buy-out is very questionable. On contrary, horizontal strategic integrations normally record higher success rate, because the expected synergies and growth opportunities can be more easily materialized (like in the case of You Tube being acquired by Google in 2006 for 1.65 billion USD).

Company cultures’ disharmony destroys up to 30% of the deals. Daimler AG (German producer of e.g. Mercedes-Benz luxury automobiles) learnt its lesson after the fusion with an American low cost car producer Chrysler. In 1998, Daimler bought 92% of Chrysler for 36 billion dollars and the so-called ‘Merger of Equals’ ended up in 2007 by the sale of Chrysler for just 7.4 billion USD. Differences between German and American ways of management, the level of formality, and operations in different price segments, contributed to the failure. The initial euphoria was exchanged for a fiasco, once the German cultural model prevailed and motivation of the American employees declined bellow a reasonable level.

Companies for Sale: The Size Matters

According to the Boston Consulting Group analysis, transactions bellow 1 billion dollars, when a bigger company acquires a smaller one, show higher probability for success. Otherwise, during the so called ‘mergers of equals’, problems of integration of two wide portfolios arise. Managers have difficulties to prioritize brands and investments; they struggle to decide which brands have the highest potential for growth and which are the most important for the current profit generation. Personal preferences also matter. Most of the time, leaders from acquiring companies behave as conquerors in a foreign battlefield: they give the highest priorities to their ‘own’ old portfolio; they do not thrive to keep the people and know-how of the company that is taken over. The acquired business loses its roots and continuity.

Historically, the most costly transaction happened in the year 2000, when Vodafone bought Mannesmann AG for 183 billion dollars. Even though the time of overpriced acquisitions is over, we can expect that successful companies will continue to finance their expansion and look for attractive acquisition targets. Managers learned that the highest growth and return on investment could only be achieved by the combination of organic growth and external buy-outs.

This article was written for the magazine Business Woman, 05 - 2013 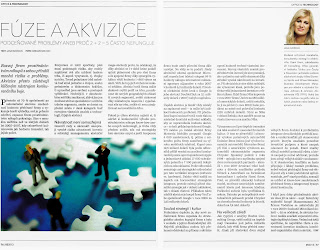 Posted by Jana Budikova at 4:04 PM